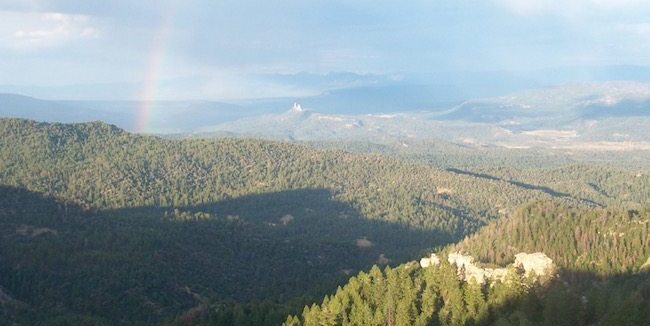 In mid-May the Bureau of Land Management (BLM) auctioned off rights to drill on the only remaining unleased parcels in the HD Mountains. The bidding companies, provided anonymity by the BLM, paid $5,200,000 for 10-year development rights on just over 6,000 acres of public lands.

If you haven’t been following this story, the HD Mountains are a remote mountain range home to stands of old growth Ponderosa, a 25,000-acre roadless area, critical year-round habitat for wildlife and irreplaceable Native American cultural sites. Flanked on the east by Chimney Rock National Monument and overlaying Southern Ute Indian Tribe lands to the south, it rests unassumingly south of Highway 160 east of Bayfield.

This area has been ground zero for years of oil and gas advocacy work. In 2011, SJCA and partners won a court victory that meaningfully scaled back pervasive drilling proposals that threatened the greater HD Mountains landscape.

But in 2016, here we are again. In March, the Forest Service and BLM announced the lease sale for the last remaining unleased parcels in the range. After winning a two-week extension to the protest period, SJCA submitted a protest that included over 400 citizen signatures. Unfortunately, but not surprisingly, the BLM denied our protest.

On May 12, as hundreds protested outside the meeting room, the BLM auctioned off the drilling rights to the highest bidder.

SJCA is currently evaluating options for appealing the sale to the Interior Board of Land Appeals (IBLA) and will keep you updated on our progress. In the meantime, please sign this petition. These signatures will be powerful as we stand up against moneyed interests to protect this critical landscape. We need your help reminding federal agencies that the people are watching.

There is also a larger storm building on the horizon: The Forest Service and BLM have proposed an additional 17,000 acres to be leased in February of 2017. This sale includes parcels in Wilderness Study Areas, state wildlife areas, and regions proposed for protection as Areas of Critical Environmental Concern. Sign up for SJCA emails and follow us on social media to learn how you can help push back against these excessive lease sales.