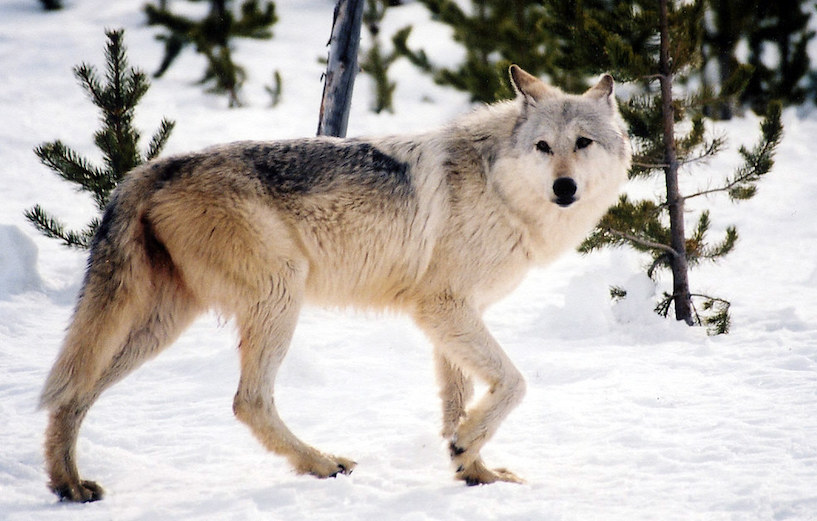 Why Restore Wolves to Colorado?

Wolves have long stirred strong emotions in this country and still do. The idea of bringing wolves back to Colorado generates passionate support as well as die-hard opposition. Yet from an ecological standpoint, wolves belong here. And the science is clear that we can manage their introduction effectively. San Juan Citizens Alliance has spent over 20 years advocating for habitat protection in the San Juan Mountains. This year we joined the Rocky Mountain Wolf Project, a coalition that is working to put a ballot initiative on the 2020 Colorado ballot. If passed, Colorado Parks and Wildlife will be directed to reintroduce wolves to the western slope by the end of 2023.

Brief History
Gray wolves once thrived throughout North America, from coast to coast and from Mexico all the way to the Arctic. They fed on bison, elk, and deer as well as smaller mammals like rabbits and rodents. But when hunters drove down the large mammal populations on which they depended, wolves turned more to livestock. This, of course, sealed their fate. The remaining wolves were hunted down by humans – shot, poisoned, and trapped until the 1940’s when none remained in Colorado. This played out throughout much of the country, in some areas being eliminated much sooner.

Reintroduction
In the 1960’s, gray wolves earned federal protections under what eventually became the Endangered Species Act (ESA). Under the ESA, recovery of the species was mandated. In 1995, after 20 years of effort, 31 gray wolves from Canada were relocated to Yellowstone National Park and central Idaho. A main fear was that wolves would prey primarily on livestock. They did so much less than feared however.

5 Reasons to Bring Wolves Back to Colorado

Wolves’ hunting behavior causes changes in prey behavior, which can create positive change in environmental conditions. We know this because we’ve seen it. Nearly 25 years after wolves were introduced to Yellowstone, we’ve seen transformational changes to the ecosystem that demonstrate just how critical wolves are. Free from their wolf predators, deer and elk populations had boomed for many decades, decimating willow, aspen and cottonwoods. The river banks eroded, beavers and songbirds birds struggled, and even scavengers were at a loss.

Once the wolves were reintroduced, they not only kept populations of grazers in check, but dispersed them, forcing them to move around the landscape more and distributing their impact. Trees and shrubs thrived again, stabilizing the soil and riverbanks, but also providing homes for birds and food for beavers. Scavengers found more leftover food from wolf kills. Beaver dams stored more water and provided habitat for numerous other species. Learn More

Wolves occupy about 10% of their former range. They once moved across all of western North America and had the potential to breed with other wolves. The small population of Mexican gray wolves in New Mexico and Arizona would benefit from the addition of genetic diversity from wolves moving in from the north. Similarly, the ability of wolves from the northern Rockies to move south and of wolves in the southern Rockies to move north would help ensure the genetic health of both populations. Restoring wolves to Colorado is the best way to rebuild this genetic interchange.

A February 2019 survey found that 67% of Colorado voters support wolf restoration. That includes 61% of voters on the western slope, where wolves would be . Further, 64% of voters in farm and ranch households and 68% of voters in households with hunters support restoration. This level of support is nearly identical to that found in earlier surveys, indicating that restoring wolves is aligned with the basic values held by Colorado voters.

Due to the legal requirements of the federal Endangered Species Act (ESA), there would be more management flexibility if wolves were intentionally reintroduced than if wild wolves naturally moved into Colorado from their current ranges north and south of the state. Currently (May 2019) any wolves in Colorado are listed as “endangered” under the ESA.   Wolves reintroduced into the state would almost certainly be managed under an “experimental nonessential” designation, which would relax ESA restrictions, allowing for actions such as harassing or removing wolves that attack livestock. This designation can help with acceptance of restoration by livestock producers, local government officials, and others with concerns about wolf presence.

Wolves were part of our original wildlife heritage. We are responsible for their demise, but we now have the opportunity to bring them back. We can do it in a way that respects and maintains ranching and hunting. While biologists sometimes seem quite certain about the functioning of ecosystems, the truth is that there is a lot that’s not known. One thing we know with no doubt is that wolves and their prey lived together for millennia and were continually adapting to each other. Our ignorance about all of the effects of wolves on ecosystems argues for a cautious approach. Aldo Leopold, the father of modern wildlife management wrote “…To keep every cog and wheel is the first precaution of intelligent tinkering.” We removed an important cog, and now we can restore it.

Future posts will address each of these points in more depth, and also discuss some of the points made by opponents of wolf restoration in Colorado.