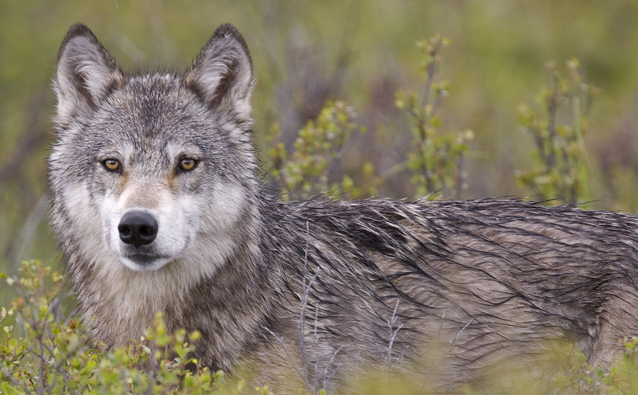 Why Restore Wolves to Colorado Part III: The Public Wants It

In our original blog, ‘Why Restore Wolves to Colorado,’ we briefly discussed the top five reasons wolves should be reintroduced to the state. Now, we’re digging deeper into each of those arguments. You can also check out Part I: Ecology and Part II: Colorado is the Missing Link for Genetic Resiliency. Blogs by Gary Skiba, SJCA Board Member and wildlife biologist.

Supporters of Colorado wolf restoration are currently (November 2019) collecting signatures to get Proposition 107 on the 2020 Colorado ballot.  If passed, it would require Colorado Parks and Wildlife to develop a plan and reintroduce wolves to Colorado by 2023. If you want to look more deeply into some of the effects described here, check out the list of sources at the end.

Public polling since the 1990s shows strong support for wolf restoration in Colorado. That support is broad-based, with majority support across gender, geographic location, ethnicity, and political party. The overall support by likely voters was 60% in 1994 (Manfredo et al.), 66% in 2001 (Meadow et al.), and 67% in a 2019 survey (Weigel and Meadow).  Each of these studies broke down the respondents into categories, including gender, age, West Slope versus other parts of the state, political party, ranchers and farmers, and others.  Table 1 summarizes some of the results from each of the studies.  Further details are in tables and figures below the references. 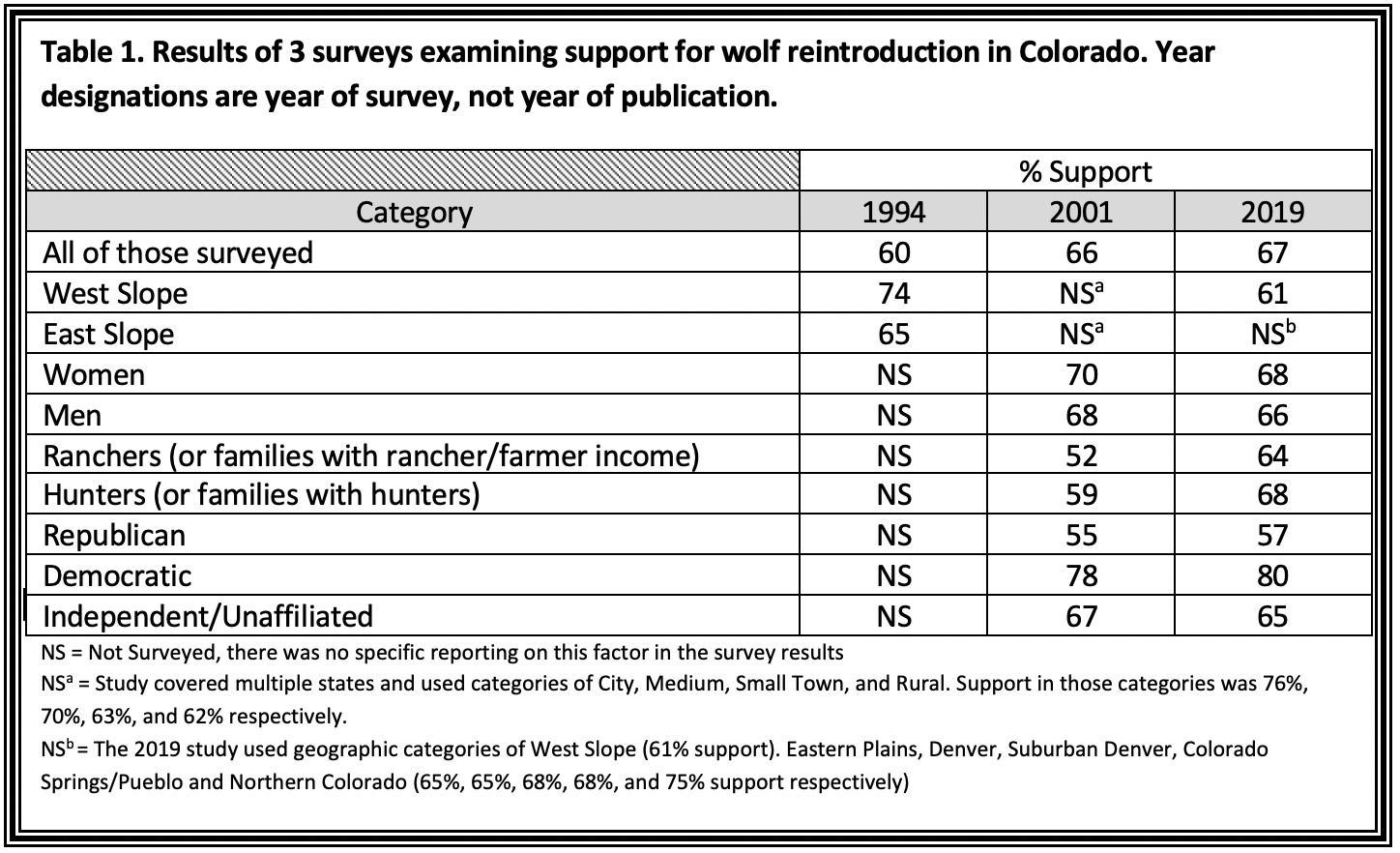 Survey results sometimes raise legitimate concerns about the methodology and potential bias in how questions are framed and asked. Two of the studies (Manfredo et al 1994 and Meadow et al 2005) were conducted through academic institutions and the methodology is described in detail in the published reports, allowing anyone to get a clear picture of how the surveys were conducted.

The 3rd study, (Weigel and Meadow 2019) was conducted by a partnership of 2 political polling firms, one viewed as conservative, and one as liberal.  The available information is a summary memo and does not included a detailed description of the methodology, but it does describe some of the methods used and some of the questions asked.

In the 2004 study, researchers asked their questions both before and after the respondents received persuasive information both for and against reintroduction (the results in Table 1 above are after receiving the information).  While the changes were not large, in all but 1 of 26 categories, approval of reintroduction increased after hearing arguments both for and against reintroduction.  The one exception was voters over 65 years of age, where support dropped from 51% to 50%, and opposition rose from 44% to 46%.

The implication seems to be that the more people understand about the arguments for and against reintroduction, the more likely they are to support it.  Interestingly, the 1994 survey found that Colorado’s West Slope residents generally have a higher level of knowledge about wolves and wolf biology than do East Slope residents.

The striking thing about these studies is how consistent support has been over a 25 year period, adding credibility to the results.

If and when wolves are restored to Colorado, they are likely to occupy areas with larger proportions of public lands, i.e., the western two-thirds or so of the state.  One commonly expressed criticism of the ballot initiative effort is that due to the fact that Colorado’s population is concentrated along the Front Range, the results of voting on the ballot initiative in 2020 will essentially be a case of the East Slope forcing its will on the West Slope.

It’s true that far more votes will be cast by voters who live in the eastern one-third of the state, particularly along the Front Range corridor from Fort Collins to Pueblo.  However, the results of the surveys indicate that the proposed ballot initiative would be supported by strong majorities on both the east and west slope.  The majority of the people of Colorado–all of Colorado–would like to see wolves restored.

Opponents of wolf restoration point to the 2016 resolution by the Colorado Parks and Wildlife Commission, which stands in opposition to reintroduction of wolves (available here).

This opposition is often couched as the “wildlife experts” opposing reintroduction, implying that it is a biologically based decision. That is not true. The Parks and Wildlife Commission is a governor-appointed body, and no current member is a biologist. While their decisions are based on and informed by biology, the Commission is intentionally designed to make political decisions, not biological ones.  That is a perfectly appropriate and necessary role. However, it’s incorrect to imply that the wolf resolution, or any other position taken by the CPW Commission, is a biological decision or that it is supported by the biologists in the agency.

Additional Results from the 3 Studies 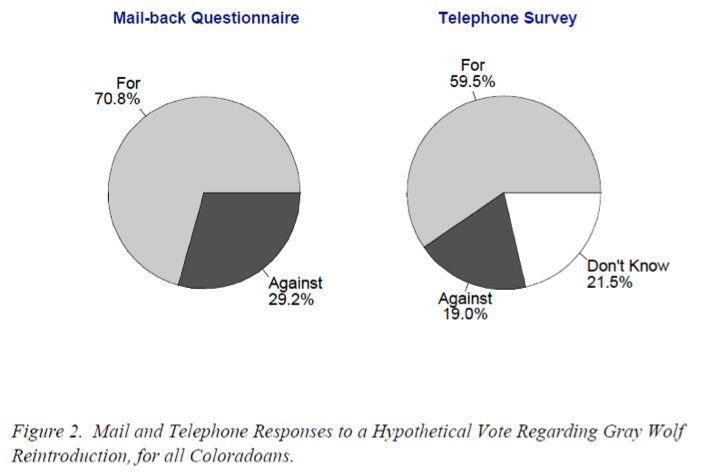 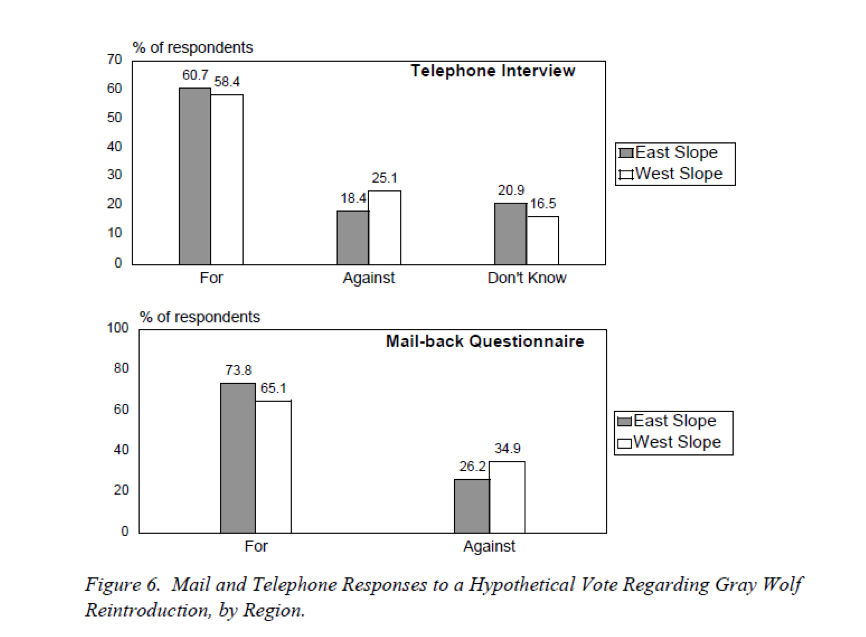 positive response toward the symbolism of wolf reintroduction (r = .18), and report having received more experience (r=.20) and prior information about wolves (r=.35). 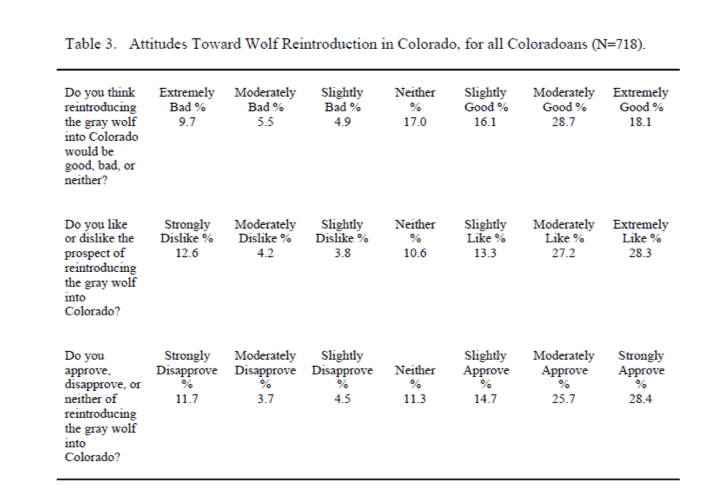 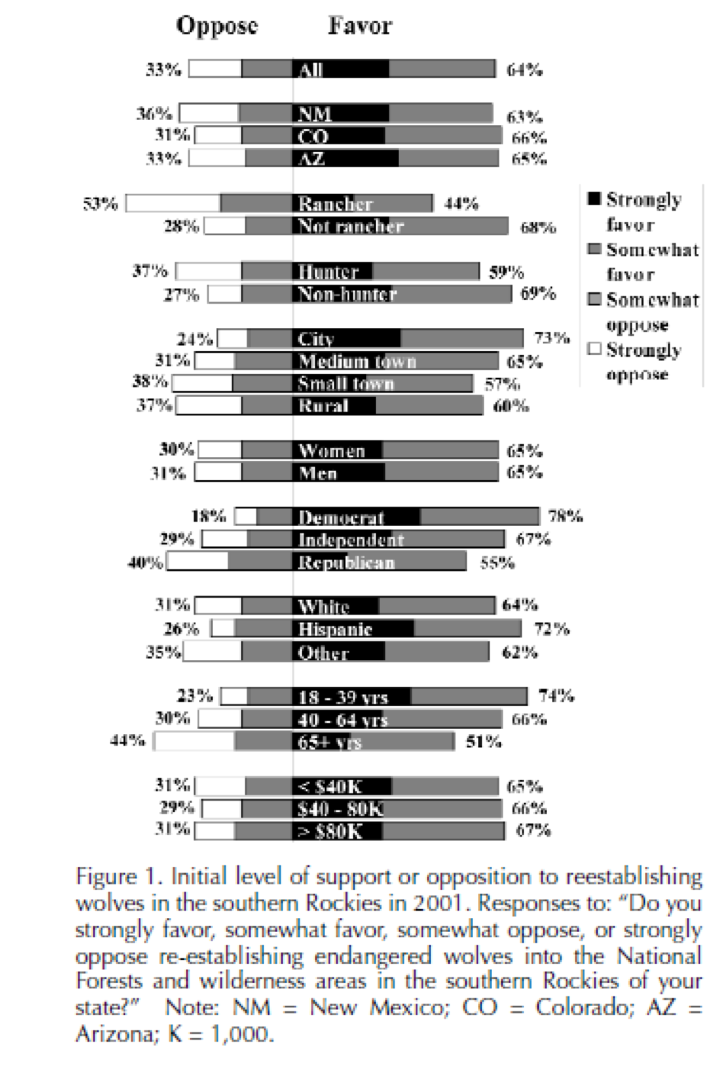 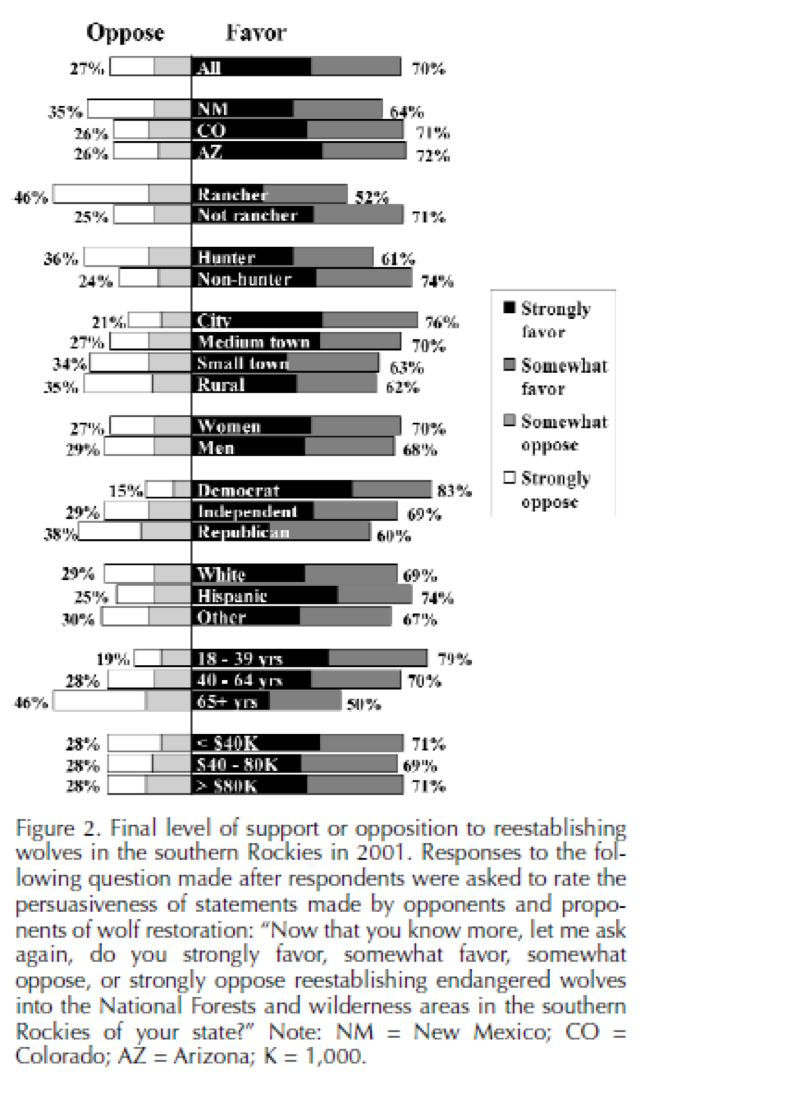